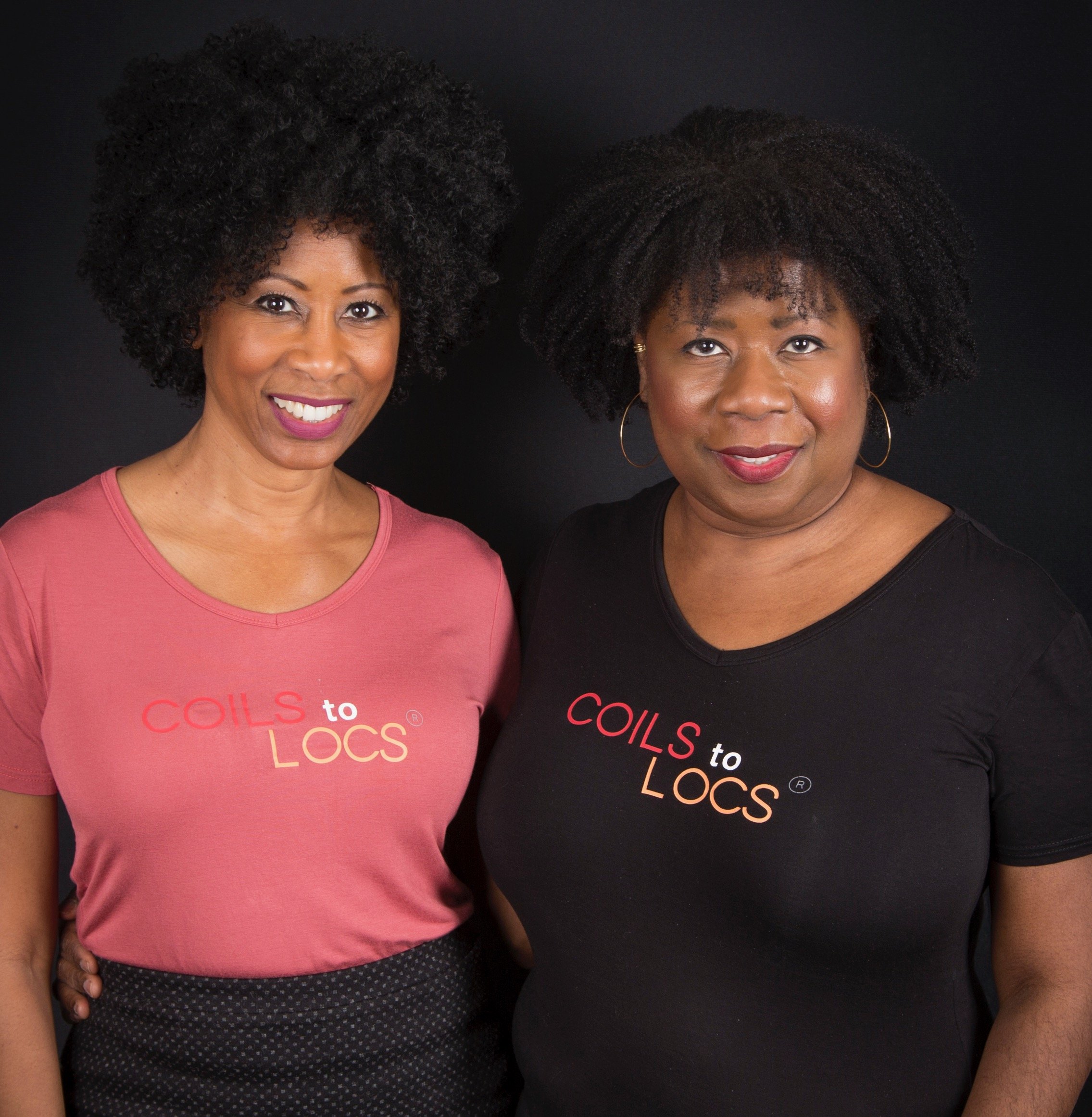 Coils To Locs: Cancer And A Life Pivot Creates A Startup

Two weeks to the day after her first chemotherapy treatment for breast cancer, exactly as her oncology nurse predicted, Dianne Austin began losing her hair. Not a few strands here and there: it came out in clumps. As a health care administration professional who spent most of her time in hospitals, she knew all too well what she was in for. She had braced herself for the nausea, the immune system boosters she’d have to inject herself with, and the draining tiredness that left her so exhausted that once trying just to walk across her dining room she was so overcome after a few steps she had to lie down on the floor, unable to make it across.

She had not fully appreciated what the hair loss would mean. Two days after the first clumps came out, she was 90% bald. She had the rest shaved off. Having seen this “cancer patient” look many times in the hospital, she had resolved not to become that. But here she was, cancer patient.

A black woman in her early 50s, Austin reflected thoughtfully on what the loss of her hair meant. To her, “a Black woman’s hair is her crowning glory. It is personal expression, individual identity, cultural representation, and a historical touchstone.” As if fighting cancer was not enough of a dehumanizing process, even with the best efforts and the most compassionate care, her hair loss added to feeling powerless and losing control.

Another big part of that business is wigs. For reasons as much practical as stylistic, wigs are a large part of the hair culture of the Black woman. In fact, the United States imports more than $600 million in wigs, the majority of which are sold in communities of color. Wigs are made of either synthetic “hair” or human hair. India and China are the world’s largest manufacturers and distributors of both. No surprise, these two nations are the world’s biggest human hair exporters, shipping 6 million and 1.4 million pounds respectively. A pound of human hair can command as much as $1,000—or more, depending on length and quality.

Austin had no intention of either succumbing to cancer or losing her self-identity. She needed a wig. To cancer patients, wigs are transformational. A wig represents regaining a sense of control, an anchor to what you had been and the hope of what you would once again be. Equally, a wig required your care, something tangible you could affect opposed to just anxiously waiting to see if your cancer’s ghostly grey smudges on x-rays were getting smaller—or larger. A wig gave you your “you” back.

Her physician wrote her a wig prescription. Armed with that and insurance covering the cost of a wig up to $350, she went to see the wigs available through the medical salons. The wigs were all straight hair. For black women, there were no kinky or curly hair wigs.

The standard commercial-grade wigs retailed by the beauty-wig shops in communities of color offered no help. These wigs were not designed for women with cancer-induced baldness. For starters, the wigs came with sewn-in plastic wig combs, designed to attach to existing hair—completely impractical for the bald pate. Moreover, the scalp of the cancer patient is sensitive and easily irritated. Many of these were made with the wig-hair attached to coarse fabrics or plastic mesh. Even a wig-cap doesn’t cover the scalp entirely, so this simply wouldn’t do. Additionally, the wigs were often of poor quality; the synthetic hair had an unnatural shininess to it, the natural hair was rough to the touch.

There was basic economics, too. These were retail stores. They didn’t take insurance; it wasn’t their business model. They also didn’t issue invoices, just register receipts. Register receipts are not accepted by insurers for reimbursement.

It wasn’t just the product that presented barriers. There was no privacy to try on the wig. At best, she recalled, the only place for privacy was in the back of the store in a cleaning closet or bathroom. Other than that, the only other option was to try on wigs out in the open. As if feeling awful from the cancer drug cocktails wasn’t enough, after mustering up every ounce of energy to go to a beauty-supply store only to feel so exposed, vulnerable, and somewhat embarrassed? Not acceptable.

Contrast this to the cancer-care hospital setting. There was privacy, a caring staff, and no question about insurance. But no curly or kinky hair wigs.

A soft-spoken woman with a steely resolve, her reaction to this was summed up in the simple phrase uttered by nearly every successful founder: “I want to solve this problem.” And by solving the problem, she meant both the immediate issue of providing quality wigs designed and made for black women with cancer as well as the broader matter of self-identity and self-care.

There is, unfortunately, a substantial market for these wigs. The American Cancer Society reports that one in three black women in the United States will be diagnosed with cancer in their lifetime. The most likely diagnosis will be breast cancer, with lung cancer and colon cancer rounding out the top three for a combined 52% incidence rate. In 2019, including all cancers, it’s estimated 104,000 black women had positive diagnoses. Worldwide, the number is far higher.

While her professional training was in human resources, including a fellowship at Harvard, she was also deeply knowledgeable about the issues of women of color and textured hair. She and her sister, Pamela Shaddock, an actress in Los Angeles, co-author the blog Natural Hair Care News. From Tyra Banks discussing how her natural hair almost ended her modeling career to dealing with humidity (“kryptonite” for naturalistas, she explains), the blog covers all the wonders and unique challenges of a black woman’s hair.

Facing this problem as head-on as she faced her bout with cancer, she founded Coils to Locs in the summer of 2019. Coils to Locs would source and distribute kinky and curly hair synthetic wigs to hospitals providing cancer treatment, starting with the anchor cancer center hospitals in her home town of Boston. Knowing full well the effort it was going to take to get this startup off the ground, she engaged her sister as well as her cousin, Cheryl McCloud to join her. All three had experience with cancer. In addition to her acting career, Pamela was very active in organizing and managing cancer-fundraising events like the Ronald McDonald House and the Avon Walk For Breast Cancer. Cheryl was in the final stages of her own cancer treatments. This combination of business and personal experience drove their passion.

With self-funding and thorough research, she was able to source five wigs modeled in curly and kinky hairstyles meeting the required high standards. The highly respected Beth Israel Deaconess Medical Center helped kick things off with her first order, followed quickly by another from Massachusetts General Hospital. Dana Farber Cancer Institute expressed interest in supporting the company as well. Revenues to date are modest, under $100,000, not unusual for a startup that hasn’t hit a first anniversary yet. Plus, with these premier health care institutions on board, she anticipates others will follow suit with revenues growing accordingly. Everyone starts somewhere, she notes. Starting with these top-shelf medical centers is a pretty good place to launch from.

The company is getting notice from the business community, too. Pitching at the Roxbury Innovation Center/VentureCafe competition, Coils to Locs came in first place. The Fairmont Innovation Lab, a business incubator, accepted her application for its pre-accelerator program. The City of Boston’s Office of Economic Development funded a consultant to work with her to explore next-step financing alternatives. Things are moving forward.

But Dianne isn’t satisfied. She is working on adding wig styles to the line so clients have more choice. Then there is the sourcing issue. She didn’t like the ethical issues surrounding human hair harvesting; Coils to Locs only uses high-quality synthetic hair for their wigs. Currently, the wigs are coming from China, she noted. Her strong preference is to have both the synthetic hair and wigs made here in the U.S., creating jobs domestically and giving her more control in the manufacturing process.

Her treatments long over, she is now in remission. While driven by her cancer experience to want to help other women of color face their cancer fights more confidently, she offered a more personal perspective on what motivates her to take on the challenge of starting a business. Her parents and neighbors were hard working people, she shared, but in her community growing up, she had no exposure to entrepreneurs.

She sees this as an opportunity to be an example to her daughter, a recent college graduate: no matter who you are or where you are in life, you can be an entrepreneur, start a business, and make a positive difference in peoples’ lives.

It’s an example for anyone. Framed in the language of venture capital, it’s a life pivot.

Check out this article in Forbes →

The Tenbar Group LLC offers consulting services to mission-driven startups, venture capitalists and impact investors, empowering them to scale their businesses and maximize returns through the creation of transformational impact. The Tenbar Group does not offer investment advice, does not make investment recommendations, and does not engage in the purchase or sale of securities for itself or others. Information herein was prepared from generally available information believed to be reliable, but we make no representation as to its accuracy or otherwise and is not a confirmation of terms.

Your impact mission is our passion. Let’s get started on creating transformational change.